C is for the CURSE OF BOOK 2

Everyone has heard of second novel syndrome: that difficulty writers have with their follow-up book. I have to admit I suffered a troubling case of it. As I’ve written elsewhere, I was also beset by bereavement and chronic illness – hence why The Madagaskar Plan has been so long coming.

But that wasn’t all. It seems for the past five years if it could go wrong, it did. With relentless regularity. Life became a catalogue of disasters and inconveniences: from IT meltdowns, to research notes mysteriously vanishing, to building work on my house overrunning (which made it impossible to write), to brinkmanship with my US publisher. Even when I hid myself away on a writing retreat to get some peace and really crack on with finishing, a group of Peruvian pan-pipers set up beneath my window and proceeded to play at full volume for eight hours a day!

I began to believe in the CURSE OF BOOK 2. And as the bizarre events piled up and delayed me further I wondered if these impediments were a sign from the gods. A warning not to finish Madagaskar, lest something terrible happen. I pictured all sorts of calamities upon publication: from my office burning down to having a heart attack to being assassinated by neo-Nazis. If further proof of the curse was needed, on the day I finally submitted to my publisher, this happened: 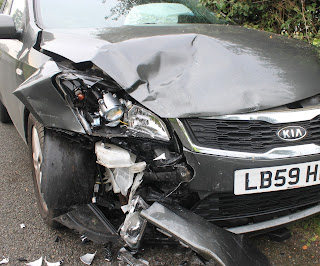 Indeed it happened less than two hours after pressing the send button. It was the first crash in my life and it wasn’t even my fault. The car was a complete write off. The mishaps didn’t end there and have continued to hound me to this day.


So is there a curse? Will terrible things happened when the book finally reaches the shelves, things to make me wish I’d never finished it? Of course not! I don’t really believe in such nonsense, everything that befell me was just an accumulation of coincidences. Having said that, I’ve set this entry to post automatically on the eve of publication... so who knows whether I’ll get through the next twenty-four hours alive.
Posted by Guy Saville at 07:45