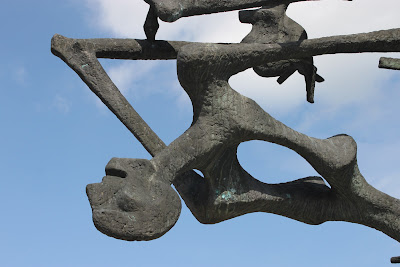 Followers of The Afrika Reich on Facebook will know that I’ve recently returned from a research trip to Germany. The main purpose was to visit a site that will play a key role in Book 2. I’ll tell you about that sometime next year as I gear up for the publication of the sequel. In the meantime (and before the A-Z resumes) I wanted to share some thoughts about my visit to Dachau – the first of the Nazis’ concentration camps, opened as soon as they came to power in 1933.
I had expected it to be a place of quiet reflection and reverence, but was surprised – you could even say shocked – at some of the behaviour I saw there. The first jolt came as I got off the train at Dachau station to find a McDonalds. Doubtless fearing bad publicity they have at least been tactful enough to make sure you can’t photograph the word ‘Dachau’ with the golden arches behind them, nevertheless it wasn’t quite the sombre arrival I expected.
From the station it’s fifteen minutes by bus to the camp itself. The entrance to the museum is tasteful and discreet – which is more than can be said about the groups of German school kids waiting to go inside. Again, to my utter surprise, they were laughing and joking; it could have been any ordinary school-trip. (In fairness I should add such behaviour wasn’t just the preserve of Germans: I also saw an American tourist posing for a thumbs-up photograph by the ‘Arbeit Macht Frei’ sign).
What should we make of this? Talking to other people who’ve visited the camp, mine is clearly not a unique experience. Perhaps it’s the laughter of nerves. Or a lack of empathy. Maybe just indifference. I know historians have written about this, calling it a process of ‘normalisation’: how events of the Third Reich have no more resonance to Generation Z than, say, the reign of Caligula. Perhaps as someone who has written an entertainment about the period, I’m in no position to criticise.
Enough of other people. How did I find the experience?
It was all relentlessly grim. An assault on the psyche. Not just in the broadest sense of man’s inhumanity to man but in the details of the daily degradations inmates were subjected to. It was that I felt the most: one’s privacy and dignity constantly assailed. And assailed by a group of inadequate, sadistic bullies. Touring the camp there was no respite. Even the memorials (including the extraordinary sculpture on the parade ground; detail pictured) had a harrowing quality to them.
I stayed for five hours and couldn’t face all of it; I gave the punishment block and crematorium a miss. And on my way back to Munich (and the security of a comfortable hotel and decent dinner) I kept thinking of a line by the Indian poet Tagore. Nothing sums up my visit better:
‘When I go home, let this be my parting word, that what I have seen is unimaginable’.
Posted by Guy Saville at 22:13

Email ThisBlogThis!Share to TwitterShare to FacebookShare to Pinterest
Labels: Dachau