D is for DIVERGENCE POINT

If you’re writing an alternative history sooner or later you have to settle on a ‘DIVERGENCE POINT’ – i.e. the moment when real, recorded history ends and a new, alternative one begins. In SS-GB it’s the successful invasion of Britain by the Nazis, in Fatherland when Hitler defeats the Soviet Union in 1943.

I settled upon Dunkirk and instead of giving the British a miraculous escape, I had them slaughtered on the beaches. Why did I choose this point? 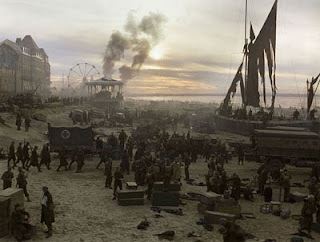 One of the themes of the book is the myths we cling to (think of Burton and his mother) and I wanted to echo this in the larger structure of the narrative. Dunkirk is often seen as the epitome of British pluck; a defeat that has somehow morphed into a victory and is seen as one of the country’s finest hours. Indeed, newspapers still refer to the ‘Dunkirk spirit’ in a whole variety of situations – from Brits abroad coping with crises to the dreary comebacks of our national soccer team.

I was intrigued by debunking this notion and having Dunkirk as a disaster. Instead of being a narrow escape it was a coup de grace that led Britain to negotiate with Nazi Germany, leaving us with peace but less national pride. Of course, once I had changed this, other aspects of the alternative history fell into place as a consequence. With Britain out of the war much earlier there was less need for American involvement; having to fight on only one front meant Germany could concentrate all its forces against the USSR and win (though as a nod to Harris, I kept the same date of 1943).

In reality, the reasons behind Hitler’s decision not to annihilate the British at Dunkirk remain a mystery. Some historians think it was down to incompetence, others that it would appeal to Britain’s sense of fair play, making them more amenable to negotiation. In my world there’s a very specific reason why Hitler doesn’t attack... though you’ll have to wait till the Prologue of Book 3 to find out!

D is also for DAMBE

In action adventure stories the hero often has some skill in martial arts. I wanted to give Burton the same but felt something like kung fu or karate would be impossibly crass. So I went looking to see if there was an African equivalent. As it turns out there were several including: kokawa, musangwe, ‘nuba’. In the end I opted for dambe, a West Africa form of boxing because a) I’d already place Burton’s upbringing in that part of the continent b) it just looked vicious and chimed with the character’s more violent streak.

You can see an example of dambe on this clip from CNN.

Curiously both I and Burton seem to have out-grown dambe... so it may not be back in Book 2. What does everyone else think?
Posted by Guy Saville at 19:00