W is for WELCOME BACK! (and a word of warning)

So, welcome back. After many months of idling, this blog is about to start up again at full pace with an A to Z of THE MADAGASKAR PLAN. As you can see I’ve had a little re-jig of this page, and now am raring to go... 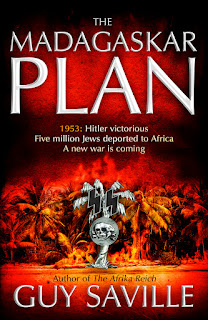 If you read my original blog you’ll already know the state of play with The Madagaskar Plan. If not, or you want a quick recap, Madagaskar is the follow-up to The Afrika Reich and is based around the Nazis’ real plan to deport the Jews of Europe to Madagascar, a remote island off the coast of  East Africa. The book was originally due for publication in 2012 but a series of mishaps means that it’s only coming out now.

Like the original A to Z, the 25 upcoming entries will give you some background information on how The Madagaskar Plan was conceived and written, as well as insights into the characters, settings, the research trips I made for the book, the links between real and imagined history and various other ‘behind the scenes’ titbits. Think of this blog as the extras on a DVD, though the style will veer more to the picaresque than exhaustive. There may also be an occasional word about the third book in the trilogy.

There will, however, be one major difference with the original blog, which was written over several years. This time I’ve been much more efficient and done everything in advance. I intend to post new entries on a fortnightly basis between now and the publication of the UK paperback (in March 2016) which means some of you may not have read the book. So to warn you in advance, there will be spoilers... though I will always let you know beforehand.

Of course the easiest way around this problem is to get hold of a copy of the book as soon as possible. It’s available to pre-order here, and unlike its predecessor, the two versions of the text are pretty much the same: Amazon, UK   Amazon, US

The other disadvantage of writing everything in advance is that will be less opportunity for reader feedback. Plenty of the previous blogs were influenced by readers’ questions about the first book... so I’ll add a miscellaneous entry before the end to cover any unforeseen issues. In the meantime, if you want any questions answered about the book, do let me know – either here, on Facebook or by messaging me directly.

W is also for the Wall of Eyes 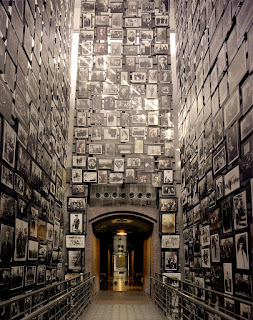 This will make no sense until you’ve read the book, but the inspiration for this came from a visit to the Holocaust Memorial Museum in Washington DC. If you’ve been there, you’ll know exactly what I mean. If you haven’t, there’s a wall inside the exhibition that is several stories high and covered entirely in photos of those murdered during the Holocaust. To stand beneath those eyes is a haunting experience. Of course, in my novel there has been no Holocaust, which begs the question: am I portraying a more benign world? I’ll leave you to read the book and decide...
Posted by Guy Saville at 19:57