T is for TUNNEL & TRAIN

One of the concepts for Afrika Reich was to make it an action thriller. Obviously this requires action! Lots of it. Beyond individual chases and fights, however, I wanted to put in a couple of big set-pieces, sequences that would last several chapters. The first of these, where the and Neliah strands connect, is the TUNNEL scene.

I wrote in a previous blog how writing is as much to do with logical deduction as it is with inspiration – so it was with the tunnel. I didn’t start with the tunnel battle and work the plot around it, rather the other way round. Early on in the planning of the book I introduced the concept of the PAA (Pan African Autobahn). However, I wanted it to be more than just a background idea; I wanted it to be integral to the story.

Initially I planned to have a battle set on the tarmac itself but soon realised I needed something more claustrophobic, something from which the characters couldn’t easily escape. And this is where the logical deduction bit comes in. The most obvious way to combine roads, battles and claustrophobia was with a tunnel.

As for the TRAIN sequence, well, this proves the maxim that nothing is ever wasted for a writer. 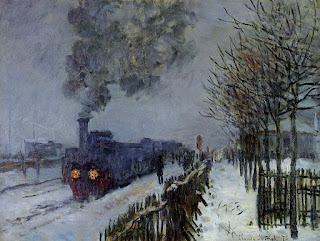 Back in my teens I wrote a screenplay called Fortress Europe. This was set in the last winter of World War 2 and was about a heist of Nazi gold. The climax of the film was a big action set-piece on a bullion-loaded train hurtling through a frozen landscape (itself inspired by the Monet picture above). Obviously nothing came of the screenplay but the idea stuck with me... even if by the time I used it again snow and ice had been replaced with the heat of . The helicopter gunships were a later addition inspired by Apocalypse Now (again!).


T is also for TRILOGY

Trilogy – the unmentionable word. From the outset Afrika Reich was conceived as a three part story with a definite beginning (Book 1), middle and end.

I’m often asked how much of it I’ve already planned. I’d be exaggerating if I said I had every nuance of the three books sorted, nevertheless I know all the key moments and the general arc of the story. The final chapters of the final book have been worked out in detail...

But there’s a twist.

For commercial reasons my publisher only committed to the first two parts (i.e. they want to see how successful they are), so I need to keep selling in decent quantities if I’m to finish Burton’s and Hochburg’s story. Which is why I’m always grateful when readers recommend their friends to buy a copy!
Posted by Guy Saville at 00:01