12th February 2011: an appropriate date to begin this blog.
Seventy years ago today the Afrika Korps was formed under the personal order of Hitler himself. It would become one of the most formidable fighting forces in history, driving the British across the deserts of northern until finally being beaten at the Battle of El Alamein. 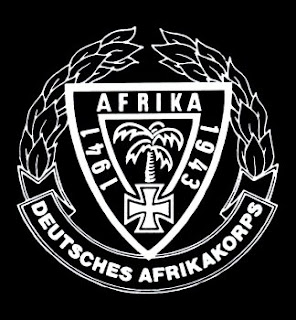 But what if it had not been defeated? What if the Afrika Korps had emerged triumphant from the then turned south towards the equator?
What if the Nazis had conquered ?
That is the premise of my thriller THE AFRIKA REICH which is published on 17th February by Hodder & Stoughton.
This blog will start properly in the next few weeks. My plan is to write something that provides extra material for those who have read the book while hopefully intriguing those who haven’t.
Watch this space…
Posted by Guy Saville at 18:35

Email ThisBlogThis!Share to TwitterShare to FacebookShare to Pinterest
Labels: The Afrika Reich