Yesterday was the book launch of THE AFRIKA REICH at Waterstones in Piccadilly. It was a tremendous event and naturally I felt obliged to say a few words of thanks to everyone who has supported me over the years. Towards the end of my speech I also mentioned some exciting but secret news. Now I can reveal all. 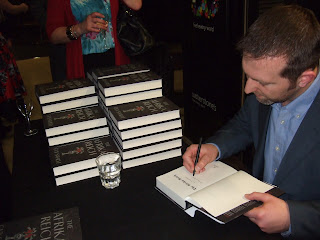 Getting published was always my ambition, but once I had my deal with Hodder I indulged myself in a few fantasies for the book.

There were five things I dreamed of:

Why the Economist? Because I think it has the best books section of any paper in the world. It is compulsory reading for me every week (as it has been for the last decade). So you can imagine my delight when I heard that the Economist was going to run a review.

But it was more than just that… which brings me to my exciting news, what I described on Facebook as ‘the most amazing telephone conversation of my life’.

On Monday afternoon the Literary Editor of the Economist phoned me up at home and told me she had raced through my book in less than 24 hours and thought it ‘the best thriller she’d read in years’. I was left utterly speechless.

What’s most gratifying is to see someone really connecting with what I was trying to do with the book. I wanted to write a novel that thrilled – but also one that was morally complex and had a serious intent.

Email ThisBlogThis!Share to TwitterShare to FacebookShare to Pinterest
Labels: The Afrika Reich, The Economist