F is for FERRIS WHEEL

When I’m working on scenes I’m always looking for ways to make them more original or unexpected. Initially Burton and Tünscher’s first meeting was set in an anonymous bar in Roscherhafen. After working on it for a while I was happy enough with the dialogue but thought the background should be more interesting. This is where the research kicked in and I decided to move it to the Tiergarten (the zoo). Bizarre as they may seem, the scenes set in Roscherhafen are all based on real places the Nazis intended to build, including an ‘education and entertainment park’ – this a decade before Disney started building in California.

The memory is an odd thing. While writing these scenes I was trying to imagine what it would be like to drink steins of beer and eat sauerkraut beneath boiling skies... then in a flash it came back to me that I have actually experienced this. There used to be a German African theme park in Florida called Busch Gardens. It is long gone, but I went there in the 80s and remembered the bierkeller with the waitresses dressed in traditional Bavarian costumes and the heavy German food in the sweltering Florida climate. I’m positive there was an oompha band.

As well as originality in a scene, it’s also important for me to delay giving away too much of the plot too quickly. As the drafts of Chapter 14 were laid down I realised that the key moment was upon the reader too soon. I needed a device to withhold it that went beyond Burton and Tünscher pausing to order another round of drinks – hence the FERRIS WHEEL. I’m sure you got this as a reference to Graham Greene’s The Third Man. 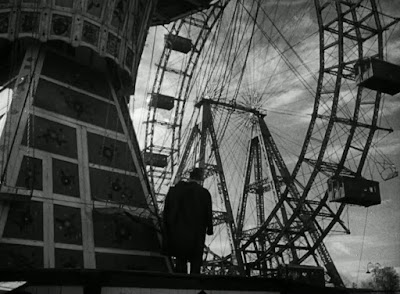 The Ferris wheel in The Madagaskar Plan is described as ‘the largest in the world’. My US copyeditor picked up on this fact and said that the time it took for a complete revolution – 4 minutes, 41 seconds – was too fast. In her diligence she had checked the timings with similar sized wheels: ‘In Japan, the 115-meter Daikanransha takes 16 minutes to go around; the London Eye (135 m) takes 30 min’. That’s what I call an attention to detail! The reason I settled on 4 minutes, 41 seconds is because that’s how the long the Ferris wheel sequence is in The Third Man. I admit this is an utterly obscure reference.

The other reason I referred to the Graham Greene scene is because it’s about two characters, Holly Martins and Harry Lime, who don’t trust each other. This mirrors the relationship between Burton and Tünscher. Thus far I haven’t said a great deal about the new characters in the book, something I’ll redress in the coming few blogs.