Reflections & V is also for...

When I first began this A-Z of Afrika Reich I meant to publish an entry a week with the last, ‘V is for...’, going live as the UK paperback was published. As with the writing of Book 2, this schedule now seems rather optimistic. But as the A-Z draws to an end I thought it was a good opportunity to reflect on it. 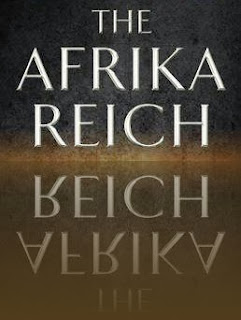 In the two and a half years I’ve been writing this blog, more than 32 500 people have visited it; I hope some of them have read it and been intrigued and entertained by the contents. It has certainly been a revealing process for myself. I’ve learnt as much about the book dissecting it here as I did while writing, perhaps more. At the same time, trying to get a handle on it has been like sculpting steam: for every assertion I make, I’m immediately aware of several contradictions. I like to think, however, that I’ve shown that Afrika Reich is more than just Fatherland or SS-GB in the tropics.

The comparison with those books has been both a boon and a curse. The great advantage was that it created an association with existing bestsellers. Against that, I never saw Afrika Reich as being of the same ilk. A naturalism has crept into novels imagining a victorious Nazi Germany, something borne through SS-GB and Fatherland and continuing to this day with the recent Dominion. I wanted to move away from that, though the demands of marketing departments meant I often had to play to the gallery and define myself in terms of Deighton, Harris et al (not that they’re bad company to keep!).

Why the naturalism? It may partly reflect a general movement in fiction. I think it also comes from a sense that if an author captures certain details then he is accurately portraying what the world would have been like if Hitler had won. I remain unconvinced. The whole point of an alternative history is that we can never know what it would have been like. A more fantastical approach served earlier examples of the genre well, such as Swastika Night, The City on the Edge of Forever (for all the Star Trek fans I know who read this blog) and The Man in the High Castle. By tendency, I’m more comfortable in this camp. This blog has allowed me to convey a sense of that and speak my mind more openly than the marketeers probably want me to. If you’ve read this far you’re in a better place to understand my intentions (yes, that word again); it’s something I plan to continue more explicitly in Book 2 – the subject of my next entry and the last in the series. While I leave you to speculate what the V can stand for, here’s the addendum in advance...

V is also for Violence

Along with the literal brigade (see ‘L is also for...’) the reaction that most surprised me about the book was how violent people found it. Obviously given its setting and subject it was never going to be a fluffy, rose-perfumed narrative, despite that I never felt the violence was as bad as some people protested. I’ve had grown men tell me they had to stop reading because they found it excessive. What this says about me I don’t know – though others have speculated (see here, for example). 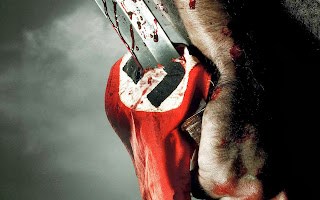 All I can say is: 1) I didn’t want to shy away from the violence that was the reality of the Third Reich and continues to this day in central Africa; nevertheless I always perceived mine as a stylised, almost comic violence, not to be taken entirely seriously 2) before submitting the book for publication I made a conscious decision to tone things down. If you think the version that ended up in the shops is bad, you should see the earlier drafts!
Posted by Guy Saville at 23:32

New comments are not allowed.