D is for DIVERGENCE POINT (part 2)

By coincidence, in the past week two readers* have emailed me questioning whether Britain’s defeat at Dunkirk really is the DIVERGENCE POINT of the book. (As a quick reminder the divergence point in a work of alternative history is the moment where events take a different path to our own version of reality.) Those two emails were actually very astute, and follow on from similar messages I’ve had over the years. So although I planned not to reveal this until a later date (if ever), today I’ve decided to confess all.

Dunkirk is not the true divergence point of the book. It is a symptom of an earlier cause. It is the place where geopolitical history changes but the real shift – a minuscule fissure in the past – predates it. If, thus far, I have promoted a slight falsehood it is because I have been playing to an audience; fulfilling the marketing needs of the book (though in my defence all the clues as to what’s really going on are in the text). As regular readers of this blog will know by now, nothing is ever quite what it appears with Afrika Reich!

So what is the true divergence point?

I’m not going to tell you for two reasons: 1) better you work it out yourself 2) rather unfairly, it’s more fully explored in Book 2. However, I believe world events are not decided at the macro level but micro. History is determined not when Caesar crosses the Rubicon – but earlier, in the accretion of childhood experiences that motivate the crossing in the first place.

Whilst you’re puzzling all this out (or heading back to Facebook, which is probably more entertaining anyway) I’ll leave you with a clue: 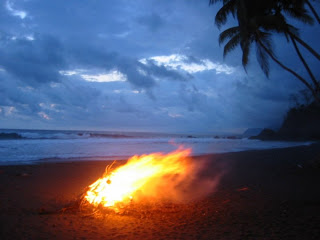 *One in Iowa, America; one in Venezuela – hello/hola if you’re reading!