U is for UHRIG

There were three aspects of the Nazis’ vision for that I wanted to represent – the messianic, technocratic and sadistic – so planned a villain for each. Hochburg is clearly the messianic, Kepplar the technocrat (keen readers will notice how he never raises his hand, merely gives the orders), while UHRIG was the violent thug.

The inspiration for Uhrig’s character came from a line in Orwell’s 1984. I can’t recall the exact quote but it’s something like ‘all that hate is sex gone wrong’. I knew Uhrig was going to be the most vicious character of the book, but I also wanted to know why.

What if he had a proclivity for black women? Given the Nuremberg Laws this would be as impossible as it was illegal, and it was the repression of his desire that had twisted him so much. Some readers have seen Uhrig as little more than a rent-a-villain, which always disappointed me because he is actually one of the most subversive characters: a member of the Einsatzgruppen who is also a miscegenist.

I also saw him coming from the Mario Bregga school of thuggery: big and bawdy, vaguely comic. Again, playing with types, I liked the idea of such a brutal character not only being funny but also an object of derision for the reader and other Nazis: both Hochburg and Kepplar make jokes at his expense.

[With the American publication due in a few weeks, there maybe people looking at this who haven’t read the book, so spoiler warning for the next paragraph.]

As I approached the end of the writing I was undecided what do with Uhrig. To satisfy the narrative I knew he had to die at Neliah’s hands but wasn’t sure of the exact circumstances. Then I made the connection between him and monsters – and knowing how in a horror movie the monster always comes back one last time, realised he had to ‘rise’ from the dead, which leads me to...

U is also for Underworld 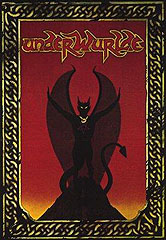 There are many theories of story. One of the most influential on me is Joseph Campbell’s ‘monomyth’ (before it got hijacked by the Vogler school... but that’s another blog altogether!). Campbell’s writing posits the idea that all stories are actually journeys to the underworld: a task the hero must undertake to discover the elixir of life. You can certainly interpret Afrika Reich this way.

The prologue shows the ordinary, upper world of a farm in Suffolk: a summer’s dawn, orchards. The rest of the book is set in the ‘underworld’ of Africa: hot, dark (often literally), with regular bouts of fire and torture, and it is in this crucible that Burton must learn the true value of home. It’s practically The Wizard of Oz with swastikas!
Posted by Guy Saville at 17:43