For the second time this year I’ve been to the cinema, on this occasion to see the latest James Bond film, Skyfall. Normally I wouldn’t comment on it but so many people have compared Afrika Reich with Bond – comparisons that usually leave me scratching my head – that I thought it deserved a blog. 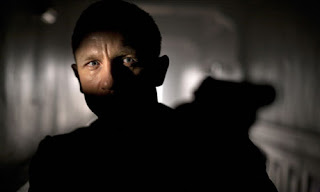 I’ve never been much of a 007 fan. I used to like the Roger Moore films as a kid but by my teens the allure was fading. This is the first time I’ve been to the cinema to see a Bond film since 1989s Licence to Kill. So what did I think of the new movie?

Beyond the galling amount of product placement, the casting was impeccable, photography sumptuous, editing bombastic but suitably explosive. There was enough intrigue to keep me engaged (though I felt the plot was a bit thin and the whole hard drive strand seemed to be forgotten half way through), along with plenty of action and some extraordinary stunts... even if some of the visual effects – the blowing up of Vauxhall Cross, the komodo dragons – were a bit dodgy. Despite all this, I was left cold. The film didn’t engage me on any emotional level. 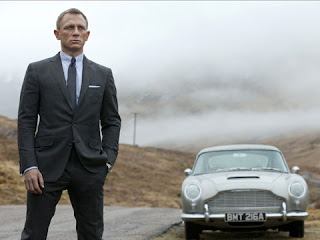 The principle reasons for this explain why I don’t recognise the link some readers have made between my book and Bond. Firstly, there’s the glamour: Daniel Craig’s sculpted body and tailored suits, the women who are perfect from their eye lashes to their heels, the cocktails, fast cars and glittering cities. This type of glamour doesn’t do much for me. It’s one of the reasons I like Leone’s films so much: half the time his characters are filthy and dressed in rotting clothes. There’s very little glamour in the world of Afrika Reich: I can’t ever imagine wearing a dinner jacket. Indeed, returning to the previous blog (‘E is for…’), Madeleine was initially a plainer woman and I was asked to make her more attractive.

For me, Bond also lacks a ‘mythic’ quality. There’s no primordial conflict between good and evil. Each film is just another mission and even in the case of Skyfall, where the revenge strand has a parallel with my story, it’s dealt with in a much more grounded way. Guns, gadgets and quips will suffice rather than that irrepressible desire to triumph no matter how battered the soul is. I’m sure plenty of people will disagree with me!

Two final points: 1) One of the carps I get about Afrika Reich is that couldn’t endure all he does. It was therefore with a certain irony that I watched Bond survive a lot worse, starting with his spectacular fall from the bridge in the opening sequence.

2) There’s a line of dialogue I’ve written in Book 2, and long before Bond 23 had a title, that may have to be changed. It comes when Hochburg surveys a cataclysmic scene and responds by saying, ‘And so the sky falls.’ It was meant as a reference to Hans Christian Anderson though I suspect now people will think it is a nod to James Bond. Readers of this blog will know different.