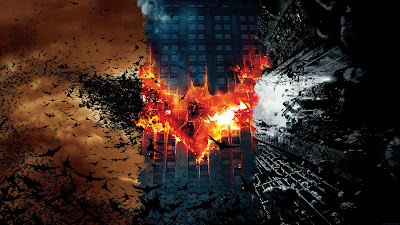 As regular readers of this blog will know I tend not to write about ‘personal’ things, mostly because I prefer discussing Afrika Reich than myself. Today is an exception as earlier in the week I saw The Dark Knight Rises… and want to tell you about it.

The first thing you need to know is that I very rarely go to the cinema. I find the communality of it off putting: all that chomping popcorn and chatting when I’ve come to see a film. In fact I’m a total fascist on the subject of talking in the cinema; when I saw Batman Begins I almost got involved in a punch-up because the person in front of me wouldn’t shut up. Second, and only a small cabal of people know this so I’m revealing more than usual today, I’ve been a closet Batman fan all my life… so my trip to the BFI’s IMAX was quite an occasion.

And well worth it. The Dark Knight Rises is a spectacle on a scale rarely seen these days: epic in its sweep with electrifying set-pieces and a real sense of danger, characters I genuinely cared about and a score so bombastic it threatened to give me a heart attack. Writer / producer / director Christopher Nolan’s insistence on getting as much of the action ‘in camera’ (as opposed to using CGI) pays off handsomely – as absurd as the notion of man dressed as a bat is, the whole thing feels real, credible. It’s not a perfect film (one plot twist is decidedly naff) but I found the overall emotional effect of the film deeply satisfying.

The whole experience was further enhanced by the gargantuan IMAX screen and sound so impressively loud that my ears were still ringing next morning! If you enjoyed the first two parts of Nolan’s trilogy I wholeheartedly recommend you seek this out, especially at an IMAX. 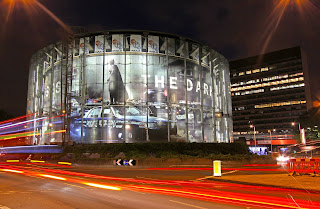 For me, the greatest triumph of The Dark Knight Rises was how effortlessly it fused character, action, morality and politics within a realistic, fairy-tale setting… and here I hope you can see the connection with Afrika Reich and why I’m enthusing so much. Indeed the mythology of Batman, its theme of revenge and aesthetic (more of the latter in ‘F is for…’), was an influence on my book. It’s always surprised me, for instance, that no one has made the connection between Hochburg and Ra’s al Ghul.

I read that Christopher Nolan is going to take some time off now before finding his next project; he’s looking for a thriller more grounded in the real world, ‘something like James Bond’. If anybody has a contact at Syncopy, let me know!
Posted by Guy Saville at 15:45