H is for HERERO

I’ve always been fascinated by the great Victorian expansion into and from my previous reading was dimly aware of the HERERO and the fate they suffered under the Germans.  However, it wasn’t until I was fleshing out Neliah’s character and ethnic background that my memory was jogged. 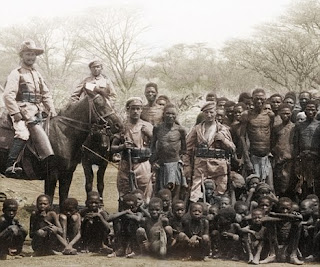 The Herero are a tribe from South-West Africa in what is modern day . At the end of the 19th century this region became a German colony (DSWA, part of the Second Reich) and after years of encroachment on their territory the Herero finally rebelled against the European settlers. The Germans responded with unbridled savagery: slaughtering thousands, leaving many more to starve. Between 1904 and 1907 it has been estimated that 80% of the Herero were wiped out. The parallel between this and Hochburg’s plans for the continent seemed obvious – hence why I made Neliah a Herero.

(NB: this is a very simplified version of events, those seeking a more detailed account can find out more on Wikipedia. I would also recommend the book The Kaiser’s Holocaust, published by Faber.)

1.      Several unexpected threads can be drawn between events in DSWA and the Third Reich. For example, the colonial governor in the years leading up to the Herero uprising was Heinrich Göring, father of the notorious Nazi. While one commanders of German forces was Franz Ritter Von Epp who went on to found the KPA, the administrative body that would have ruled had the Nazis conquered the continent

2.      I taught myself a smattering of Herero while writing the book so all the lines Neliah and Zuri speak in their native tongue are correct (I hope!). However, my study-source was a book published in the 1890s which meant some words – helicopter, for example – didn’t exist. In these cases I had to neologise, creating new words from combinations of existing ones

Curiously, some of the first readers of Afrika Reich thought the Herero massacres were a fabrication; one publisher cited this as a reason for rejecting the book (i.e. he felt it was a strand of alternative history ‘too far’). I think this demonstrates how poorly known this genocide is while also proving the dictum, ‘Those who are ignorant of the past are doomed to repeat’. Many historians believe what happened to the Herero was a precursor to the Holocaust, indeed the BBC even made a documentary called From the Herero to Hitler, which rather neatly leads me to... 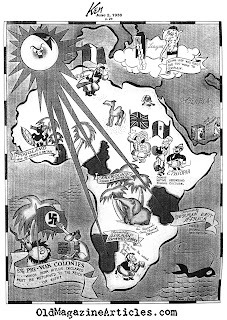 H is also for HITLER

One of the first decisions I made with the book was that HITLER would not directly appear in it. The same went for other well known Nazis.

Some readers have told me they would have liked a cameo, or even a more substantial role, but personally I felt it a bit crass. It also misses the point of what I’m trying to do. (I had a similar reaction to those who suggested I include people such as Nelson Mandela or Ben Gurion.) I think alternative history works best if these real figures are like shadows: their darkness falls across events without their physical presence.

Having said all that, I do have a scene in mind (the prologue of Book 3) where an on stage appearance from Hitler might be necessary. We’ll see...
Posted by Guy Saville at 17:59