M is for MEN ON A MISSION 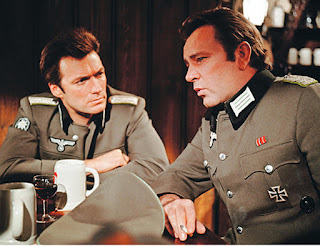 Before I start, a quick apology for not replying to people’s comments until today. For some reason Blogger kept locking me out of the system – hence my silence. I think I’ve sorted it so hopefully will be able to respond from now on. Anyway… M.

When I say I had to start from scratch, I mean it. The only elements I kept from the original version were the title (see also ‘K is for...’), setting and two character names: Burton Cole and Walter Hochburg, more of whom shortly.

I began by jettisoning the idea of as a journalist looking for a scoop. It worked in the original version of the book but was insufficiently dramatic for a thriller. An obvious alternative suggested itself. Instead of going to interview Hochburg, should plan to assassinate him. This in turn lent itself to a ‘MEN ON A MISSION’ (MoM) plot, something in the vein of The Wild Geese or Where Eagles Dare, two of my favourite MoM books/films.

MoM plots have an established structure. The hero is offered a mission (usually by an enigmatic figure); he recruits his team (a combination of old friends and new blood who squabble incessantly); they train, then are dropped behind enemy lines. At this point something goes terribly wrong (often involving a double-cross). The team now have to ‘overcome and adapt’, some are killed, before finally – impossibly – they pull off the mission. Then it’s back home for tea and medals.

This is how the new version of TAR originally began... then I had a flash of inspiration.

Instead of following the old clichés, wouldn’t it be more interesting to subvert the genre? Rather than ending with ‘mission accomplished’, what about beginning the book that way? MoM stories rarely show you how the heroes get home (think of that last scene in Where Eagles Dare when Smith and Schaffer just doze off in the plane). What if the journey home took up the majority of the narrative? What if all the twists and betrayals and action followed the assassination of Hochburg – rather than leading up to it?

It was a moment of inspiration and the start of more than two and a half years of work.

M is also for MADELEINE 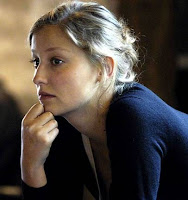 In the past couple of years I’ve noticed a lot of Madeleines appearing in fiction. I wonder if this is to do with the publicity surrounding Madeleine McCann. My Maddie was christened many years before and drew her name from Madeleine Albright (former Secretary of State) – although she didn’t look like her! I often get asked who I’d cast in a film version of TAR. The honest answer is I don’t really think about it... apart from Maddie who I always saw being played by a Romanian actress called Alexandra Maria Lara. Indeed I used to keep this photo of her on my desk and every time flagged in his journey home I’d look at it and urge him on.

Email ThisBlogThis!Share to TwitterShare to FacebookShare to Pinterest
Labels: Madeleine, Men on a Mission, TAR, The Afrika Reich, The Wild Geese, Thriller, Where Eagles Dare