A is for APOCALYPSE NOW 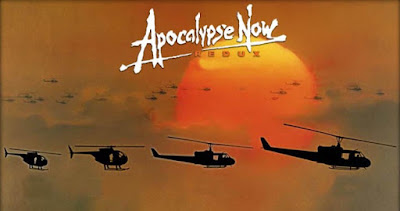 Books, like wars, rarely have simple origins; rather they are a confluence of events. So it was with The Afrika Reich (TAR). Although the book was published in February 2011, the first stirrings I had for a story set in Nazi-occupied go back to the 1990s. I began with a title.

I remember a day shopping in . I was browsing in Dillons (a defunct book store) and came across a new edition of William Shirer’s The Rise and Fall of the Third Reich. Half an hour later I was in Dorothy Perkins in Oxford Street - though can I add not shopping for myself! Inside the store there was a huge TV screen with the BBC news playing. Some story from Africa came on and the newscaster said (I recall this vividly), ‘Now over to our correspondent, Tim Hewitt’.

correspondent. The Third Reich... Somehow the two fused in my mind – and I had ‘The Africa Reich’! I thought it would make a good title and so duly scribbled it down in my note book (I don’t go anywhere without one).

Jump forward a couple of years and I was on the beach in (where I used to live) reading Philip K. Dick’s The Man in the High Castle. On page 17 of my Penguin edition there is a fleeting reference to Africa: ‘He thought of , and the Nazi experiment there. And his blood stopped in his veins...’ What could ellicit such a response? The thought intrigued me and I remembered my Dorothy Perkins moment.

Gradually an idea for a novel took root and somehow grafted itself on to Conrad’s Heart of Darkness, one of my favourite books. I imagined a character journeying up river though Nazi Congo to find a Kurtz-like character waging a war of genocide against the native population. As I began sketching out a plot it was a simple progression from Heart of Darkness to APOCALYPSE NOW (which I’m sure you’ll know is loosely based on Conrad’s tale). At that point the engine of my imagination began to rev up.

Inspired by Coppola’s masterpiece I created a hellish and hallucinogenic version of Nazi Africa, interspersed with journal entries from a world-weary war correspondent called Burton Cole. He was going up river to find the scoop of the century: an interview with the enigmatic Walter Hochburg, architect of the Africa Reich. After more than a year’s writing I submitted it to my agent who said it was brilliant: a fusion of the literary and thriller, philosophical musings and big action sequences.

It was also utterly unsellable.

And so the manuscript joined that pile of other rejected books I have stored away in my office. It was the end of 2002, but although I didn’t know it at the time, not the end of The Afrika Reich.

A is also for ARNIM 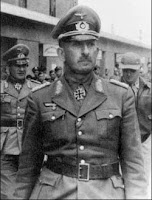 Field Marshal Hans-Jürgen von ARNIM was appointed head of the Afrika Korps in March 1943. One of the things I wanted to do with the book was mix fact and fiction and to that end several real people appear in the narrative. I like the sense of verisimilitude this brings, though as you’ll see when we get to ‘H is for...’ I didn’t want to introduce any major historical figures.
Posted by Guy Saville at 22:00